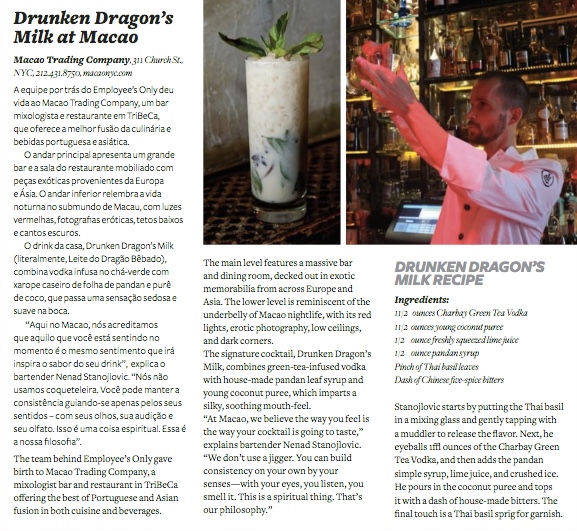 The team behind Employee’s Only gave birth to Macao Trading Company, a mixologist bar and restaurant in TriBeCa offering the best of Portuguese and Asian fusion in both cuisine and beverages.

“At Macao, we believe the way you feel is the way your cocktail is going to taste,” explains bartender Nenad Stanojlovic. “We don’t use a jigger. You can build consistency on your own by your senses—with your eyes, you listen, you smell it. This is a spiritual thing. That’s our philosophy.”

Stanojlovic starts by gently tapping the Thai basil in a mixing glass with a muddler to release the flavor. Next, he eyeballs 1.5 ounces of the Charbay Green Tea Vodka, adds the pandan simple syrup, the lime juice, and then crushed ice. On top, he pours the coconut puree and tops it with a dash of house-made bitters. The final touch is a Thai basil sprig for garnish.

Kristin Butler is a seasoned editor, copywriter and journalist who profiles entrepreneurs, reports on business trends and developments—from renewable energy to master-planned Tribal communities—and ghostwrites for motivational speakers and thought leaders who dispel self-doubt and ignite self-determination. Kristin holds degrees in journalism and women & gender studies from The University of Texas at Austin. She’s an ambassador for female empowerment, diversity & inclusion, and personal development. View all posts by Kristin Leigh Butler